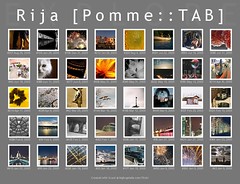 A poster of the 40 photos of mine considered "interesting" photos according to Flickr' s top secret interestingness algorithm.

My personal favourites are not all in there and there are some photos that I don't like but have been found to be "interesting".

That's often true for other people's photos too.

That's why I don't go often to the "Explore" pages of Flickr.

Flickr Soup To The Soul, Utata, The world through my eyes, my own West London group and all the London group out there, and so many more ...