Another silly diagramme unearthed by the people at BoingBoing and themed on Dungeons and Dragons whose creator Gary Gygax died recently.

When you look at the full version of the diagramme, you'll see a rectangle about "people blogging about diagrams". I am such a nerd!

Flowchart: How D&D; is a gateway drug to every flavor of nerdiness: "Wired's Adam Rogers wrote a lovely, sweeping obit for Dungeons and Dragons creator Gary Gygax in this weekend's New York Times that included this flowchart showing how D&D; was a gateway drug into every kind of nerd-dom: 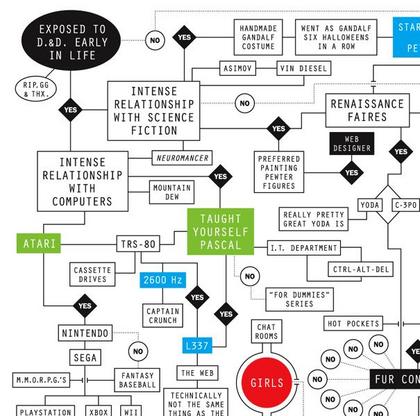 We live in Gary Gygax's world. The most popular books on earth are fantasy novels about wizards and magic swords. The most popular movies are about characters from superhero comic books. The most popular TV shows look like elaborate role-playing games: intricate, hidden-clue-laden science fiction stories connected to impossibly mathematical games that live both online and in the real world. And you, the viewer, can play only if you've sufficiently mastered your home-entertainment command center so that it can download a snippet of audio to your iPhone, process it backward with beluga whale harmonic sequences and then podcast the results to the members of your Yahoo group...

Geeks like algorithms. We like sets of rules that guide future behavior. But people, normal people, consistently act outside rule sets. People are messy and unpredictable, until you have something like the Dungeons & Dragons character sheet. Once you've broken down the elements of an invented personality into numbers generated from dice, paper and pencil, you can do the same for your real self.