Oh this is amazing. I'm a huge grapefruit fan, especially for breakfast.
The trouble is that I'm always afraid to splash people around me (and even self).
My housemate used to call me the grapefruit terrorist ;-)
I thought it's me who has a personal problem with grapefruit.
I'm glad to know there are people out there so "pissed off" by grapefruit's juice that they work out such objects, true gem of warfare in the "conquest" of the grapefruit.

Grapefruit spoon with built-in cocktail umbrella from 1933: "Cory Doctorow:
In 1933, Modern Mechanics magazine proposed to end the 'grapefruit wars' with a spoon that had a cocktail-umbrella-like shield to protect one's eyes from errant squirts: 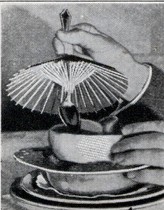 AT LAST the grapefruit has heen conquered. The weapon employed in the conquest is an 'umbrella spoon' shown at left, which automatically opens into a large shield when you gouge down into the meat of the fruit. When you raise the spoon to your mouth the shield closes.